The automobile has shaped virtually every segment of American life.  All you have to do is look around and you will see evidence of this in every direction. Not only is our country covered with roads, streets and highways, there are shopping malls, office parks, hotels and suburban houses all built for consumers driving cars.

Did you ever wonder how this happened? Why not buses, trains, subway systems or other forms of public transportation? They could have easily been expanded to get us around our country. Why the car? Well, the guys at Pollard Jeep of Boulder, CO, a local Colorado Jeep dealer say it was a matter of timing…and Henry Ford. 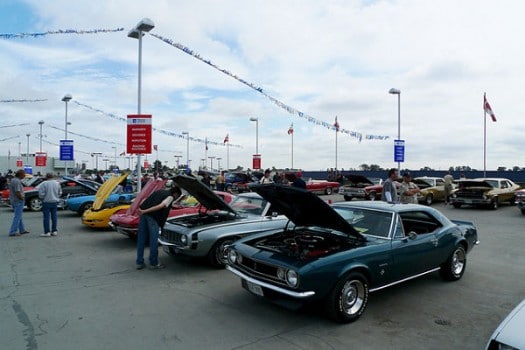 Once upon a time, the United States didn’t have many roads. People walked, or rode horses, on what were essentially wide footpaths. By the mid-1800s, horse-drawn transportation began to fade in popularity, though, and railroads became the dominant way to travel.  Soon the country was crisscrossed with railroad tracks. In the major cities, streetcars were the primary way the urbanites got around. Then the car was invented.

The Obsession with the Automobile

Despite a rather slow adoption at first, automobiles started to catch on at the turn of the century. Between 1900 and 1915, the number of cars in America jumped from around 8,000 to more than 2 million. The man given the most credit is Henry Ford, founder of the Ford Motor Company.  It is said that Ford coined the term “assembly line,” and was one of the first to apply mass production principles to the process of building automobiles.

By the early 1930s, automobiles were becoming an integral part of American life and there were hundreds of companies making automobiles.  At that point, all facets of living in the United States were affected by the automobile. The deal was sealed in 1956 when President Eisenhower signed the Interstate Highway Act and created more than 42,500 miles of highway across the nation.

Today, in the 21st century, the very fabric of America is bonded together with the automobile. That being said, there is an anti-automobile movement that is beginning to be developed. A return to when life was simpler. People who’ve moved out to the suburbs to avoid urban living are now considering moving closer to their jobs in the city. Will this start a downward trend in automobile ownership?  No, it doesn’t seem likely. American is still a car culture and is likely to stay that way for years to come.  What we are seeing now is a shift in what cars are used for.  As consumers move closer to the city and seek to drive less, the automobile just gets used less than before for casual travel and more for specialized travel such as holidays or trips to visit family and friends.

Sedan vs coupe is an old battle that has been fought by many car enthusiasts as some prefer vehicles like Integra sedan, and others like to have cars like Chevy coupe. But, most of the debaters have... END_OF_DOCUMENT_TOKEN_TO_BE_REPLACED