The Cars That Made Lamborghini Great

Few people would argue against Lamborghini as being one of the most impressive and enduring sports car manufacturers on the planet. But how did they get to where they are today?

Their rise has been an interesting one, and here are the 4 cars that made Lamborghini great! 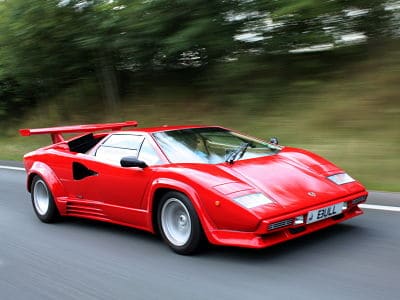 If you plan to buy a Lamborghini, you might still be thinking about getting a Countach. And that’s because they’re one of the most enduring and striking cars Lamborghini have ever made. It was made between 1974 and 1990, but despite being out of production for 25 years, it remains a popular car.

It really set the standard for Lamborghini, and it’s the model that all following cars have followed. That angular body that is so synonymous with Lamborghinis started with the introduction of the Countach in the mid-1970s.

The Diablo was the Lamborghini model of the 1990s. It’s a great car to this day, but when it arrived in 1990 it was something else altogether. There had never been another car like it, and it remained that way until its run ended in 2001. It was the kind of car that every man wanted to own.

The Lamborghini Diablo was so incredible because of its power and speed. The V12 engine was unrivalled and produced an incredible sound. But, as with all Lamborghinis, it was the look and the style that really made people take notice. The low down, angular body was an upgrade on the design innovated by the Countach.

This is the car that we have to thank for Lamborghini’s continued existence and ability to thrive. Without the Gallardo, which it arrived in 2003, the car manufacturer might have gone out of business a long time ago. This is the car that pulled in the punters and still sells in good numbers to this day.

And it’s one of the best selling models the company has released for good reason. It’s a car that doesn’t look old or dated at all, despite being 12 years old now. It’s one of the best supercars of this century, and Lamborghini will have to work hard to continues to improve upon it.

After the Gallardo ceased production in 2013, the Lamborghini Veneno is one of the cars that has arrived to fill its shoes. And, so far, it’s looking like a pretty good replacement. The Veneno is incredibly expensive, and there haven’t been many made, so it’s certainly not a replacement for the Gallardo yet.

However, it is pushing the company in a new direction, and that can only be a good thing in the long-term. Although it is recognisably a Lamborghini model, it seems to point to something new that we haven’t seen from the company before. It’s unique, which isn’t something you can say about many sports cars.

Of course, there are plenty of other great cars that Lamborghini have produced over the years. But, if you ask me, these are the cars that have really made Lamborghini great.

The 5 Greatest Subaru Models The 2014 Honda Civic Tourer: Should You Buy One?

Sedan vs coupe is an old battle that has been fought by many car enthusiasts as some prefer vehicles like Integra sedan, and others like to have cars like Chevy coupe. But, most of the debaters have... END_OF_DOCUMENT_TOKEN_TO_BE_REPLACED