Fuel Cell Technology – One for the Future

Fuel cells do need oxygen but the basic fuel is Hydrogen. One of the major positives about this technology is that it generates electricity that does not cause a lot of pollution. The basic purpose of a fuel cell is to generate electrical current that can be used to do any sort of work such as powering an electric motor.

There are various types of fuel cells. Compressed hydrogen and oxygen are used in Alkali fuel cells, with a solution of potassium hydroxide used as their electrolyte in water. These cells have the potential to produce an output of 300 watts to 5 kilowatts and can achieve an efficiency level of approximately 70 percent and they can be operated at a temperature of 300 to 400 degrees F (150 to 200 degree C). In order to provide electricity and drinking water, Alkali cells were used in Appollo spacecraft.

Molten Carbonate is another type of fuel cells that use higher temperature compounds of salt like magnesium and sodium carbonates. They have the ability to produce about 60 to 80 percent of efficiency.

Phosphoric Acid, Proton Exchange Membrane and Solid Oxide are other popular types of fuel cells with features that distinguish them from one another. 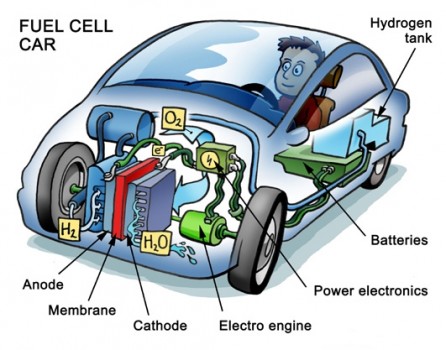 Taking into account the ever-increasing oil and gas prices all across the world, car manufacturers have been trying hard to come up with different forms of energies and experts believe that fuel cell technology will become extremely popular with the passage of time due to its ability to drastically improve the fuel economy. On top of that, it is getting popular due to its environment-friendly attributes. Fuel Cell Vehicles run on hydrogen gas instead of gasoline, which lowers down the overall cost.

Toyota, one of the most popular automobile brands of the world, is all set to launch a Fuel Cell Vehicle concept car in the upcoming Tokyo Motor Show and analysts believe that it may turn out to be a trendsetter.

The Brits are very enthusiastic about their motorcars. Let’s take a look at the latest market trends and best-selling cars in the UK: Ford Fiesta: Image Source: Flickr It is astonishing to see but... END_OF_DOCUMENT_TOKEN_TO_BE_REPLACED