Hyundai made a lot of news when they debuted the new HCD-14 Genesis Concept at the 2013 North American International Auto Show in January. Hyundai has now made an announcement that they are now moving the same concept car to Michigan for the first time so that they can put it on display at the Rollings Sculpture Car Show that will take place in downtown Ann Arbor. The all new concept car will be on display from 2:00 pm to 8:00 pm on Friday for the audience. Sharing more information about the news, Hyundai spokesman said that it was a collective decision to bring the concept car back to Michigan. 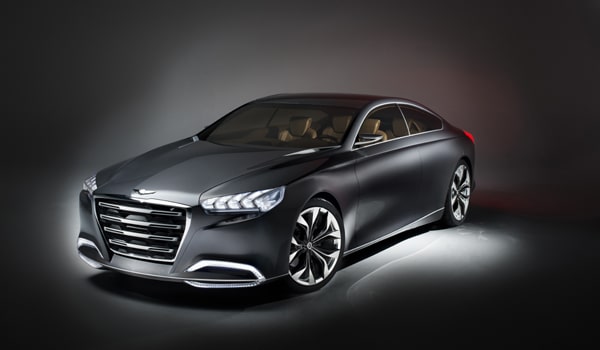 He said that the award winning concept vehicle will appear at the show along with many other concept cars, antique cars and even classic cars that have made lot of news in the market. Hyundai HCD-14 Genesis Concept has already won 2013 Concept Car of the Year and Most Significant Concept Vehicle of the Year award from various automotive journalists around the world. Chris Chapman, Chief Designer at Hyundai Design North American Design Center said that this concept car is a window to Hyundai’s future and it shows that Hyundai is focusing on driving dynamics and technology along with smooth design flow. He said that that he is really glad to see positive response for the car. Hyundai said that this is the 18th year of the Rollings Sculpture Car Show and they want to celebrate the event in a better way and therefore they are putting up this car for display for the visitors.

The Brits are very enthusiastic about their motorcars. Let’s take a look at the latest market trends and best-selling cars in the UK: Ford Fiesta: Image Source: Flickr It is astonishing to see but... END_OF_DOCUMENT_TOKEN_TO_BE_REPLACED