Ring Brothers first stunned the world at SEMA 2013 with their LS-powered Pantera. This year, they’ve made a comeback with a completely revamped ‘66 Chevrolet Chevelle. One of the highlights of this year’s SEMA, this monster from Ring Brothers is equipped with a whopping 980HP engine, and is called “Recoil”.

The Recoil Chevrolet Chevelle from Ring Brothers was unveiled in the Royal Purple booth #23057 in SEMA’s Performance Hall on Tuesday, November 4, 2014. It packs the GM LS7 Corvette Z06 7.0-liter engine that chugs out an enormous 980HP, topped with a Whipple supercharger. All this power is transmitted to the wheels by a Tremec T-56 six-speed manual transmission to make this a truly track-oriented sports car.
The Ring Brothers’ changes to the regular ’66 Chevrolet Chevelle are not merely performance upgrades, there are cosmetic enhancements as well. 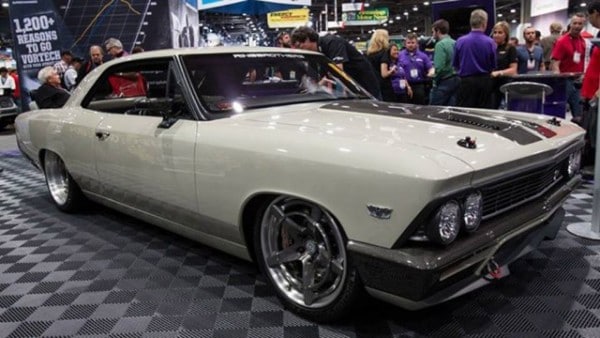 Giving a modern look and interior design to it, they have used carbon fiber for its hood, headliner, dashboard, bumpers and trunk lid. The interior sports an aluminum finish, that’s been hydro-dipped with a tweed-like pattern. The process is the same as the one used to apply camouflage graphics to guns. It involves taking any screen-printed ink pattern and floating it on water, then dipping a metal piece into the water to transfer the ink’s pattern to it.

Other notable additions to the original’s interior include seats that remind you of the ones installed in rockets in movies. The wheels are special edition HREs. A Racepak digital display is also on board.
On the outside, the car was one of the modest ones at SEMA, with its simple two-tone gray paint successfully hiding the true wow factor under the hood.

This supercar took 5000 hours to build at a cost of $70 per hour according to the makers.

The Brits are very enthusiastic about their motorcars. Let’s take a look at the latest market trends and best-selling cars in the UK: Ford Fiesta: Image Source: Flickr It is astonishing to see but... END_OF_DOCUMENT_TOKEN_TO_BE_REPLACED