Although North American auto sales totaled 16.5 million for 2014, and are likely to exceed that number for 2015, growth in other global markets haven’t been as good or as consistent. Automakers and original equipment manufacturers (OEM) aren’t letting slower sales outside North America to deter them from investing in new technologies to drive the future innovation of the auto industry. Just as the most advanced technologies for space travel have greatly impacted everyday life, the best technologies in Formula 1 racing are often major influences on future technologies for passenger vehicles. The industry and consumers are apt to benefit from any or all of the following 5 innovations. 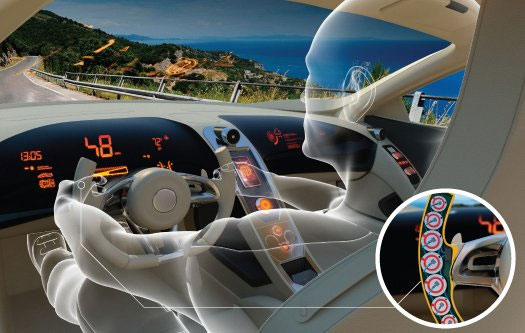 According to various studies, electronic systems account for more than 90 percent of the modernization of automobiles today. These include:

•    Safety features, such as accident avoidance and keeping vehicles in their lanes of traffic.
•    Sensors that signal the owner when maintenance is required.
•    Telematics that monitor and gather information on usage and driver safety that are automatically shared with the driver’s insurance company to match coverage and premiums more accurately.
•    Infotainment systems for music, social media and essentially the same communications and information connectivity as a computer or smartphone.

Johnson Controls, a supplier of interior parts for the auto industry, unveiled its ID15 concept at the North American International Auto Show during early 2015. What excited attendees of the show maybe more than the innovations themselves were that they were ready for production now and not during some indeterminate future. The centerpiece of the ID15 concept is a rotating table between the front seats of the vehicle, so the driver can join conversations and other activities with the other passengers and still monitor the autonomous operation of the vehicle. Innovation has also come to the driver’s seat, as the “swingback” feature maintains the position of the lower portion of the seat, but allows the upper part to swing 18 degrees.

Drivers may not be ready for the top of the car seat to tap them on the shoulder, but that is what Jaguar Land Rover is developing at its Advanced Research Center in the UK. This innovation is just part of a warning system to prevent dangerous interactions with bicycles and motorcycles. Instead of standard dashboard icons or sound warning systems, Bike Sense will interact more directly with drivers, so they can react quicker. For example, if a bike is approaching a parked car from behind, the driver will feel the door handle vibrate when reaching for it, so he or she doesn’t open the door into the path of the cyclist. Bike Sense will generate some sounds, but they will be the tinkle of a bicycle bell or the distinctive horn of a motorcycle, and will be heard through the speaker closest to the location of the approaching cycle.

After decades of development costing billions of dollars, Hyundai may have overcome most of the technological challenges of bringing a practical hydrogen fuel cell/electric motor to the market with the 2015 Hyundai Tucson Fuel Cell. Based on test drives by WardsAuto editors, the Hyundai seems to be able to deliver on many of the promises of fuel cell technology that have stymied the industry. One tank of hydrogen is enough fuel to travel 265 miles (426 km) in the Hyundai Tucson Fuel Cell, plus the engine is very quiet, compared to other fuel cell-powered motors, and only takes minutes to refuel.

5.  Giving Cars the Sense of Feel

The sense of feel is important to humans, as it tells them when they are injured and pinpoints the location of pain and other sensations. The Intelligent Damage Detection System from Hella, a German automotive supplier, will give vehicles a similar sense of feel, so drivers will know when any body panel surface has been scratched or dented or received even more severe damage. The system uses very small piezo-based electronic sensors that can be attached to the underside of body panels. Not only will the system indicate when damage has occurred, but also whether it is major or minor.