Are you considering buying your first motorcycle? Motorcycles are a lot of fun to ride but you should know the risks involved. We aren’t trying to make the case that you shouldn’t become a motorcyclist. To the contrary, if you drive carefully and defensively, you can have a lot of fun owning and riding a motorcycle. Before you take the plunge, however, here are a few points for you to consider. 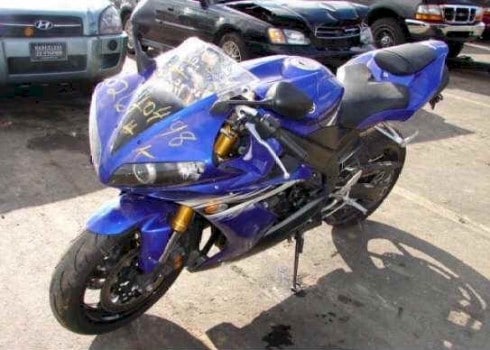 The term “road rash” is a metaphor that describes what your skin looks like when you have a motorcycle accident and you slide across road pavement. Needless to say, it’s a usually a lot worse than just a rash. In a car accident, this rarely happens because you have seatbelts and airbags that keep you safely seated in the automobile. With a motorcycle it’s quite different because you are riding out in the open and have no protective metal cage around you. Even in a minor accident on a motorcycle, the probability that you will end up on the road surface is very high.
Unless you are an EMT and see the results of accidents of this sort, you are unlikely to understand how bad these scrapes can be. It’s quite common that motorcycle riders wearing light clothing to have their skin and muscles scraped down to the bone. Even in relatively minor accident. Not only that, pieces of gravel and dirt are going to get buried in your wounds and will have to be picked out by ER staff. And that hurts a lot.

Think about the types of people that drive cars. You have everything from newly minted teenage drivers to elderly citizens out there and some of them don’t exactly focus intensely on what they are doing. The problem is that if they mess up, it usually isn’t life threatening. For you on a motorcycle, it can be. When a 5000 lb car turns left right in front of you when you are going through an intersection, the results aren’t going to be good.

The problem is that that sort of thing happens fairly often.  As anyone who has ridden a motorcycle for a while and they will tell you stories of near misses. You can level the odds somewhat by driving very defensively but the guy in the 5000 lb car will always have the advantage.

Even if you are covered from head to toe with protective clothing to prevent road rash, you still are going to get hurt if you fall down at speed. Let’s face it, humans weren’t design to absorb impacts like that. Up until just a century or two ago, the fastest a human was going when they fell was about 10 mph. When you fall at that speed, you don’t experience a lot of trauma. When you fall at 65 mph, bones break and skulls (without helmets) get split open.

Animals are not your Friends

Plenty of people have hit an animal while driving, whether it be it a bird or a squirrel or even a deer. When you’re on a motorcycle, it’s not like a car when this happens; it’s just you and the animal, one-on-one. Basically that furry animal becomes a small wall you are going into at 60 mph. Just avoid it, you say?  That’s what the animal thinks too and they often turn right into whatever new path you choose and bang!

Bottom line, listen to the folks at Mr. Ed, a Phoenix Arizona based car financing company: what’s a normal road hazard for an automobile can become a possibly deadly encounter when you’re on a motorcycle. Don’t draw the conclusion that riding a motorcycle is a death sentence. Enjoy the freedom of the open road but driven defensively and wear a helmet.

Sedan vs coupe is an old battle that has been fought by many car enthusiasts as some prefer vehicles like Integra sedan, and others like to have cars like Chevy coupe. But, most of the debaters have... END_OF_DOCUMENT_TOKEN_TO_BE_REPLACED