The first automobiles had steering systems that connected directly to the wheels. Back then, automobiles were essentially motorized carriages so steering them wasn’t difficult.  When cars started to grow in size and weight, however, it became a chore to muscle the steering wheel around. The car manufacturers knew this was a problem and many started work on “power-assist steering solutions. Soon prototypes of vacuum, mechanical, and electrical power-steering systems started to appear but none worked well enough to make it into production. One engineer, however, was convinced that hydraulic power steering was the best solution and continued to work on it. His name was Francis W Davis. 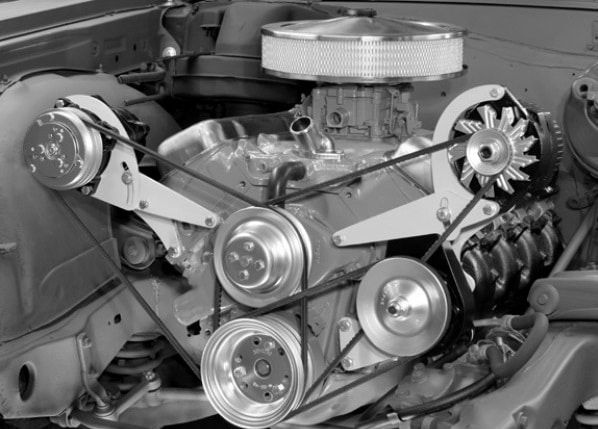 Francis W Davis was a mechanical engineer trained at Harvard University. In 1906, he went to work for the prestigious Pierce-Arrow company and was put into the group that did the designing of the steel moulds. Since these moulds were all controlled by hydraulics, he soon became an expert in the field. After many years of faithful work, in 1922 he left the company to become a consulting engineer with a specialty in hydraulics.

One of the last projects he was working on was a new power steering system. Davis knew that he could design a practical hydraulic system if given enough time. The challenge for him was to make the technology small enough to be used in a car. The problem was that the existing technology, known as a “pressurized hydraulic system, ”required needed large storage tanks of pressurized oil and were complex with components such as pumps, unloader valves, accumulators and lots of heavy-duty, hydraulic hose lines.

After much work attempting to miniaturize pressurized systems, he had an idea. Rather than use a standard closed-valve pressurized system, he developed an open-valve system that allowed hydraulic fluid to flow continuously until assistance was needed and then it was closed and pressure was allowed to build up. This would allow a much simpler, more compact solution.

Davis designed a prototype of his new system and installed it in his Pierce-Arrow Roadster. Not only did it make the car easy to steer, it also removed annoying road vibrations. Road vibrations were a major issue for automotive engineers at the time.

It also addressed the problem of “steering reversibility,” as Davis described it. This is when a car hits an obstacle and the force is transmitted to the steering wheel -sometimes causing the wheel to be pulled out of driver’s hands. Davis solved this by designing his system to eliminate reversibility. It wasn’t an easy solution but it worked quite well.

Davis’s design was ingenious and all the major car manufacturers were interested. But in the late 1930s, the depression hit and with sales slowing to a crawl, few manufacturers were interested in licensing the technology. Earnhardt of Gilbert, AZ, a full Chrysler, Dodge, Jeep Ram dealer, pointed out to us that when the car market picked up after the World War II, Chrysler was the first company to jump back on board. In 1951, they introduce a hydraulic power-steering system on its flagship Imperial sedan. It was a big hit.

It only took a few years but by the mid-1950s most of Detroit was offering power steering on their cars. In fact, by 1956, more than two million vehicles had been sold with power steering. Thanks to Davis’s persistence, the power steering is used in just about every automobile made today. The only difference between Davis’ original system and today’s techniques is the method by which they are actuated. Some are still hydraulic but advanced electric systems are becoming popular.

Sedan vs coupe is an old battle that has been fought by many car enthusiasts as some prefer vehicles like Integra sedan, and others like to have cars like Chevy coupe. But, most of the debaters have... END_OF_DOCUMENT_TOKEN_TO_BE_REPLACED